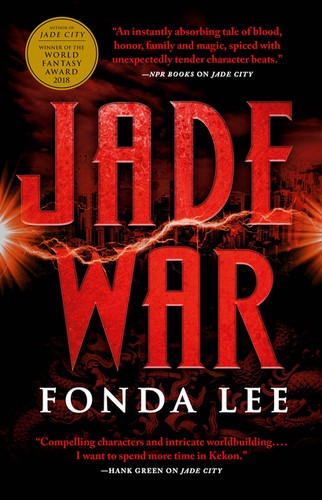 I think I might like this sequel even better than the first in the series. As hinted at by the end of Jade City, Lee expands the world in book 2, bringing outside events to bear on Kekon and entangling the Kauls in things beyond its shores which they might prefer to ignore. But she has the good sense to do so mostly as a couple of tightly focussed subplots.

My favourite of them is Anden's time in Espenia. In Jade City I found it very entertaining how that place was clearly a stand in for the US, but it was totally flat seen through xenophobic Kekonese eyes. This was a fun inversion of the usual trope, but also would have been a bit much to continue, so instead we get to experience Espenia through Anden first being banished there and gradually making a bit of home in it. Port Massy feels very true to the NYC of the big wave of Jewish immigration in the early 20th Century, and his host family alternately remind me of the host family that put up my uncle when he first moved to Peoria, or of that uncle & aunt themselves in their early days in NYC living at the end of a subway line. All of it, the place, the community, the distance, and the pressures felt very real and well observed, and it provided a great chance to turn Anden into a fully realised character; one of my favourites now.

Wen also became much more of a whole character, and I enjoyed her arc in itself and for the ways her relationships with Shae and Anden developed. Shae remains the person I'm really cheering on through the book, and I found Hilo to be the one weakness: so much of the drama is driven by his actions, aptitudes, and mistakes, but he still feels more like an idea than a person.

I'm looking forward to getting my hands on Jade Legacy.